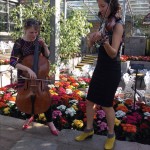 This was an event that could not possibly have been better. The lavish background of plants behind the performers, the gentle sounds of running water, and a wonderful day of sunshine ensured the perfect setting for the music chosen by violinist Alice Rickards and cellist Sonia Cromarty. Entitled Transplanted, this was a series of short string duos with three each representing the four seasons. Central to each season was a piece by the Scottish Composer James Oswald. Born in Crail in the East Neuk of Fife in 1711, Oswald was a composer, arranger and cellist who rose to become Chamber Composer to King George III. His compositional technique is a fusion of continental, especially Italian styles with aspects of Scottish Folk traditions. His most famous work entitled Airs for the Seasons saw a revival of interest in his music by members of the Scottish fiddle fraternity who sensed a special affinity with their own music.

Today’s performance entitled Transplanted featured four of his pieces from this work each representing plants from the four different seasons. Oswald’s compositions all fit onto a single sheet of manuscript so for their work, Transplanted, Alice and Sonia commissioned eight different contemporary Scottish composers to write pieces of the same length with two composers each standing alongside Oswald in each season, each choosing a different plant that flourishes in Spring, Summer, Autumn and Winter.

The result was a delightful series of strongly pictorial pieces whose musical shaping seized on a particular aspect of the plant in question. Perhaps now you will understand why the Winter Gardens was the perfect venue for this music!

The duo opened with Primrose by Oswald. This soft and gentle flower was often laid on the graves of children and the gentleness of Oswald’s composition matched this flower. The music suggested spring freshness too.

Eddie McGuire is a composer who, like Oswald brings classical and folk influences together. His attractive music was inspired by his childhood experiences on a farm where he enjoyed seeing the cows eating clover in the fields. In his piece entitled Clover, peaceful grazing is interrupted when insects begin to bother the cows. This was reflected in the lively playing that interrupted more gentle reflective music.

In her piece, Heartsease, Hanna Tuulikki who is an artist as well as a composer uses the different names for the miniature pansy to shape the rhythms of the music. It came to us in delightfully teasing little sections.

Oswald’s Heather Bells opened the Summer section. In this lively piece you could recognise the features that attracted the Scottish fiddlers to the music. It was a wonderfully sunny little piece.

In Judith Weir’s Sundew the struggles of trapped insects were depicted. Not great for the insects but making great listening for the audience.

David Fennessy’s The Changeless and the Changed represented a recently discovered member of the Dandelion Family, the St. Kilda Dandelion. The two instruments were used separately for much of the music though coming together at one point. Harmonics were a strong feature of this work – difficult to play but presenting no difficulties for our two virtuoso players.

Oswald’s Sneezewort represents a plant that was used in the manufacture of snuff and he did indeed include some humorous suggestions of sneezes in his music. The Waxcap is a woodland fungus and Martin Kershaw’s music suggested the dark forest corners where this fungus grows. There was also a sense of both autumnal richness and the approach of winter. Cladonia Bellidiflora is a lichen and composer Stuart MacRae used imitation between the two instruments to suggest the fact that lichens are actually a symbiotic fusion between fungus and alga in which two separate but well matched organisms come together as one. The music did precisely that.

James Oswald’s Hawthorn was another of his pieces in which the jauntiness of Scottish music came to the fore. It was followed by The Juniper Run by Chris Stout who is himself a prominent folk fiddler though he did play the Bach Double Violin Concerto along with Jonathan Morton at a concert by the Scottish Ensemble in the Sanctuary of Queen’s Cross Church. This is where Aberdeen Chamber Music Concerts will be holding their events this year, beginning on 12 October with a performance by The Arcadia String Quartet of Romania, an absolutely brilliant ensemble. Do come and hear them!

Today’s National Chamber Music Day with High Heels and Horse Hair was really special. Many people turned up to listen. I was particularly fascinated by the reactions of young children some of whom looked delighted, others perhaps puzzled with what was going on. Many who were just passing stayed to listen. We hope they will come and listen to some more of our concerts. They can be assured of a warm welcome.