In association with THE SOUND FESTIVAL 2015 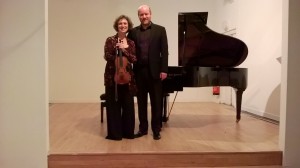 This second concert in the series promoted by Aberdeen Chamber Music Concerts was also the final event in this year’s sound Festival. It was also the fifth concert in a series given by Krysia Osostowicz and Daniel Tong in which they have played all ten of Beethoven’s Violin and Piano Sonatas – and along with each Sonata, a work inspired by Beethoven’s music specially commissioned from ten different contemporary composers.

The duo required three more of the Beethoven Sonatas to achieve their chosen quota of ten. On Monday, these were Sonata No.2 in A Major, Op. 12 No.2 – No. 4 in a minor, Op. 23 and the last, and one of the very best, No. 10 in G Major, Op. 96. At the very first concert in the Music Hall, Krysia and Daniel began with the very first Sonata so there was something satisfying that they should reach the end of their amazing Odyssey with the last of the Sonatas.

The three contemporary commissions in Monday’s concert were among the best, all of them absolutely delightful and very different. The looks on the faces of the audience as they were performed proved that they were going down particularly well. The companion piece for Sonata No.2 was composed by Peter Ash (b.1961). Ash was born in Iowa and is an American conductor/composer now based in London. He is possibly best known for his opera, The Golden Ticket, based on Roald Dahl’s story Charlie and the Chocolate factory. He is also artistic director of the London School’s Symphony Orchestra. These details suggest that Ash is interested in music that would appeal to the young in particular. He seized on the sheer light-heartedness in the opening movement of Sonata No. 2 for his composition entitled A Major Chase – itself a whimsical title if you think about it for a moment. It began with Daniel Tong quite literally “tickling the ivories” at the top of the piano. The violin followed in the chase and there were little breaks in the music that suggested the score for a cartoon film illustrating the pursuit of one character by another. Being from the USA Ash included the spirit of the Hoe Down and the fugue near the end added to the spirit of the chase – after all the word fugue can also mean running away. Best of all, when the duo moved straight on to play the opening of the Beethoven Sonata it was almost as if it was still part of Peter Ash’s chase. In the opening movement the piano was certainly running with little chugs from the violin underscoring the idea of busy motion.

The violin was firmly in the limelight in the second movement although the full ensemble playing was magnificent too. This was a relaxed and deliciously sweet movement followed by a wonderfully fresh sounding rondo in which Daniel Tong managed to suggest, though most tastefully, just a hint of swing.

Krysia and Daniel decided to play the companion piece to the Sonata No. 4 in a minor after the Beethoven. Although this work is in a minor, only one of two that uses the minor key, the other one being No. 7 which we heard in Newton Dee on Friday, it moves so fast that it dispelled much of the idea of sadness which does emerge here and there in the first movement. At times in this movement, the piano even seemed to dance a little.

The opening of the second movement was played with delightful delicacy – on tip toe as it were. The fugue was jaunty – altogether very sunny music. The finale had a sense of edgy urgency and little pauses which Judith Bingham picked up on for her companion piece entitled The Neglected Child imagining this Beethoven Sonata to be his neglected child.

Judith Bingham (b. 1952) is a composer and singer who for many years was a member of the BBC Singers. On Wednesday last week she was in King’s College Chapel to hear the University Spectrum group perform some of her pieces.

The Neglected Child was a lovely piece. Full of emotion and atmosphere and quite romantic; sweet but a little sad it did indeed, as Judith wrote in her contribution to the programme note create a picture “of a child staring out of a window, lost in an internal world of dreams and fantasy”. This certainly gave us a new outlook on the Beethoven Sonata.

David Matthews (b.1943) was largely self-educated as a musician. He edited Deryck Cooke’s performing version of Mahler’s 10th Symphony and is an expert on the music of Michael Tippett whose music he admires.

His companion piece to the last of the Sonatas, No. 10 in G Major, Op. 96 was simply called Sonatina. Matthews had managed to concentrate four complete movements into just around seven minutes. It had many of the features of Beethoven’s Sonata built into it in one way or another but for me it had a great deal of its composer’s personality in it as well. I thought it was very much English music and I loved it.

Daniel Tong gave us a detailed insight into the composition of the 10th Sonata composed a decade after all the others. It was to be performed by Archduke Rudolph Johannes Joseph Rainier of Austria, a gifted pianist and the French violinist Pierre Rode no longer the player he had once been. An infection had caused problems with his arm. As a result Beethoven worked hard at creating a Sonata that Rode would still be able to play convincingly. For some composers this would have diminished the work but Beethoven’s genius was such that he transformed the music into something stunningly beautiful. Towards the end of the final movement there are moments of virtuosity but not many. Throughout the sonata the piano played by Daniel Tong added many touches of special brilliance and if the virtuosity of the violin part so evident in some of the other sonatas is toned down, Beethoven adds something else to the part, a soft ethereal beauty, long breathed melodies like the hymn-like slow movement and a depth of emotional charge, often very gentle but always deeply felt. Krysia Osostowicz’s performance in this Sonata got straight to the heart of this music and she took us all along with her – absolutely gorgeous!

Our magnificent duo must be so happy that their Aberdeen project has gone so well, drawing so many people in to hear Beethoven with his companion pieces. Yet they must be sad that it is now over. Well, as they say in Aberdeen, “Haste ye back!”