THE GREAT AMERICAN SONGBOOK AND BEYOND

Aberdeen Chamber Music Concerts had one of their biggest audiences ever for what was a new venture, something of a departure from their usual programming. The internationally renowned jazz pianist and educator Rossano Sportiello gave a special workshop in Queen’s Cross Church on Sunday afternoon the day before his concert. He spoke about his own career in music, wanting originally to play popular Neapolitan melodies on the piano, melodies with which his Italian background made him familiar and then going on to study classical piano at the conservatory. Almost by chance he discovered jazz and fell totally in love with it, listening to the many famous American jazz pianists and learning from them. He began teaching at the age of sixteen and became a talented educator. 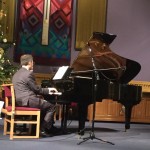 At Sunday’s workshop he gave three young local pianists kind encouragement in their own adventures into the world of jazz piano. I was particularly impressed at the way he joined the youngsters at the piano filling out their playing and making it sound really quite amazing. The look of sheer delight on the face of young Aron Kovacs, only thirteen years old, when Rossano joined with him on the piano was a joy to behold.

The concert itself on Monday was beyond brilliant. Sportiello’s piano technique is the very embodiment of spontaneous fluency. He is the master of so many different kinds of touch, from dreamy liquid melody to sizzling red hot jazz ferment. His concert touched on so many different jazz styles from ragtime to bebop and so much more.

Rossano Sportiello opened his programme with two delicious Jerome Kern melodies; Smoke Gets in Your Eyes and All the Things You Are. He sold us the tunes in luscious relaxed mood before moving on to exciting variations.

His second medley of tunes on the theme of Dreams was fascinating, so full of varied piano colour.

Erroll Garner’s Misty began by living up to its title before hotting up with varied left hand work. More amazing still was his introduction to George Shearing’s Lullaby of Birdland using a piano Sonata of Scarlatti. The movement of the classical piece to the jazz was absolutely seamless.

I liked the story of the friendly rivalry and friendship between Art Tatum and Vladimir Horowitz which Rossano used to introduce his variations on Tea for Two.

Matching the two Jerome Kern numbers, Rossano opened the second half of his recital with two gentle songs by George Gershwin, Someone to Watch over Me and The Man I Love.

The Billie Holiday medley ending in up tempo mood with When You’re Smiling was delightful and then we moved on to a pianist who first impressed Rossano so much, Teddy Wilson.

Leonard Bernstein’s Lucky to Be Me was followed by a white hot version of Count Basie’s The Shoe Shine Boy – absolutely magnificent playing.

Rossano shared his classical training with us in performances of music by Schumann and Chopin whose music he eased magically into the jazz idiom and best of all was his second encore, Mozart’s Variations on Ah, Vous Dirai-je Maman (Twinkle Twinkle Little Star) which like the Scarlatti and the Shearing morphed seamlessly into swinging jazz mode with a marvellous spicing of humour.

This was a delightful concert from beginning to end. I enjoyed it thoroughly and learned a lot from it as well. Sandy and Joan MacDonald who were largely responsible for organising the event must be absolutely delighted with the success of the entire enterprise.