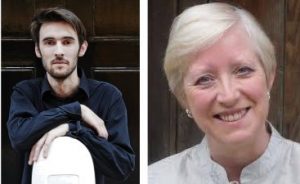 Susan grew up in Edinburgh and was the first woman to take a degree in music at Kings College, Cambridge. Her career encompasses solo, duo and chamber music playing and she has been at the heart of the internationally admired ensembles, such as Domus, the Gaudier Ensemble and the Florestan Trio. She gives Masterclasses, and serves on competition juries throughout Europe. She is the author of five acclaimed books about performance, the most recent one (2019) “Speaking the Piano” earning her a five-star review from BBC Music Magazine.

Philip also enjoys a richly varied musical life, equally at home in concerto, duo and unaccompanied repertoire and passionate about chamber music. He is the principal cellist of the Scottish Chamber Orchestra, has given recitals at the Wigmore Hall and other prominent venues and festivals at home and abroad. He too grew up in Edinburgh, studying at St Mary’s Music School and later with Ralph Kirshbaum at the Royal Northern College. In 2008 he became the first UK cellist to win first prize at the International Bach Competition and followed this with major prizes in the other competitions. He plays a cello made in 1697 by Carlo Giuseppe Testore.

Quartetto Noûs, formed in 2011, has established itself in a short time as one of the most interesting chamber music ensembles of its generation. “Noûs” comes from a Greek word meaning “mind”, with implications of rationality, inspiration and creativity. The quartet’s immersive performances are the result of a professional training where the Italian tradition and the most influential European schools are combined. They studied with the Quartetto di Cremona at the Accademia Walter Stauffer in Cremona, at the Basel Musik Akademie with Rainer Schmidt (Hagen Quartet), at the Escuela Superior de Música “Reina Sofia” in Madrid at the Accademia Musicale

Chigiana in Siena with Günter Pichler (Alban Berg Quartet), and at the Lübeck Musikhochschule with Heime Müller (Artemis Quartet). In 2015 Quartetto Noûs was selected to take part in the project “Le Dimore del Quartetto” and won a scholarship. During the same year it was awarded another scholarship offered by the Foundatión Albeniz of Madrid and won the Piero Farulli Prize, given to the best emerging chamber music group in the current year, the most prestigious Italian music critics’ award. 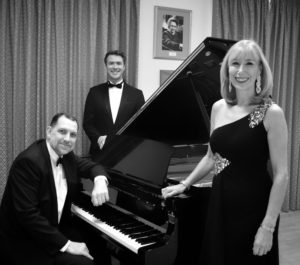 Moira Docherty’s love of opera began when she sang with Haddo House Opera and Choral Society. She is a versatile musician, comfortable in a wide range of genres, including opera, oratorio, musicals and recitals, classically trained at NESMS (the North East of Scotland Music School ) with Alison McDonald, Raimund Herincx and occasionally with Lisa Milne. She is a principal soloist with Tayside Opera, where she has sung title roles in10 operas. She sings with Aberdeen’s Con Anima, and in Paul Mealor’s Caritas choir, but sees Queen’s Cross Church as “home”, being a member of its church choir.

Colin Brockie, originally from Ellon, started singing and acting at an early age with the Children’s Theatre and Youth Choir at Haddo House, and sang with the NYCofS for eleven years. While studying for a BA Hons. in Design and Craft at Grays, he participated in many musical shows in Aberdeen. He then completed a Masters in Solo Performance at the Royal Northern College of Music, appearing in many operatic productions there and later singing in the chorus of Buxton Festival Opera and Glyndebourne Festival Chorus.

Tim Tricker grew up in Suffolk, beginning the piano at the age of six, and the bassoon at eleven. On coming to Aberdeen University in 1989 to study for a degree in English Literature, he sang with King’s College Chapel Choir and was musical director of the University’s Gilbert & Sullivan Society. After graduating he held two musical positions in Edinburgh, but then returned to Aberdeen to complete a PhD, and became a teacher at the University. He conducts the Concordia String Orchestra, the Grampian Concert Orchestra and the Grampian Hospitals’ Choir, but he is also in frequent demand as an accompanist and a composer. 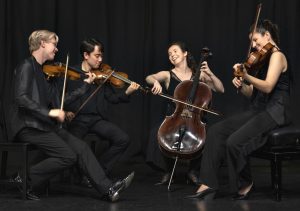 Due to the current COVID situation this concert is cancelled. We will attempt to reschedule it to another date. If you have purchased tickets from Aberdeen Performing Arts please contact them for a refund. 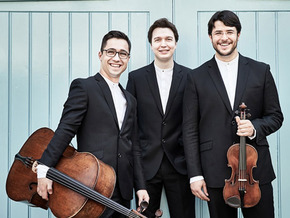 Formed in 2009 at the Guildhall School of Music & Drama, in 2015 the Trio Isimsiz won 1st Prize and the Audience Prize at the Trondheim Competition, and in 2017 2nd Prize at the Haydn International Competition in Vienna. They were selected for representation by Young Classical Artists Trust (YCAT) in 2013 and were awarded a fellowship from the Borletti-Buitoni Trust in 2018. They have performed widely in Europe, highlights including recitals at the Stavanger, Mecklenburg-Vorpommern, Peasmarsh and Gower Festivals (broadcast by Radio 3), the Tivoli Concert Hall, Snape Maltings, Fundacion Juan March in Madrid and Marianischer-Saal in Lucerne. Further afield they have undertaken tours in China and Argentina. We welcome them for their third visit to ACMC

Since its formation in 2015, Ensemble Burletta have been delighting audiences in prestigious venues across the UK and beyond, performing some of the very best music for clarinet and string quartet. Initially formed to rediscover the neglected music of Hans Gál, Ensemble Burletta have developed a keen interest in the works of similarly side-lined composers. Their 2016 world premier recording of clarinet chamber music by Hans Gál for Toccata Classics received glowing reviews in the Gramophone Magazine and during 2021 they recorded and released ‘Diaspora:’ music for clarinet and strings by composers of Jewish origin. 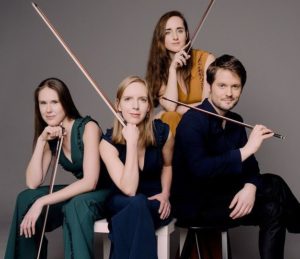 The Dudok Quartet of Amsterdam is forging a reputation as one of the most creative and versatile young quartets of its generation. With its ethos of “sharing the heart of music”, the Quartet is committed to crafting unique and eclectic programmes in order to engage with its audiences in new and imaginative ways.

In repertoire ranging from Ligeti, Shostakovich and Weinberg through to Mendelssohn, Mozart and Beethoven, the Dudok Quartet constantly strives to forge and explore new pathways and connections in music. Their intelligent approach and flair for programming also sees them regularly perform their own arrangements of pieces by composers such as Gesualdo, des Prez, Brahms and Messiaen.

Please note that programmes and ensemble members are liable to alteration.